A long time ago when I was about 16 I was almost arrested because apparently Im a one man gang in Cypress, TX because I was spray painting over the phone numbers of signs that were around my house. Now that I have a car I stop and pick up as many of the signs as I can. I get that people are just trying to earn a living but they just look so trashy and if I dont go and pick them up on a regular basis then there are 2 then 3 and its just stupid to let them keep putting them up. I just smile to know its 2$ for every sign I pick up 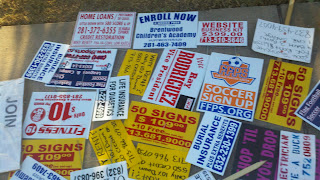 Its funny some people look like you are crazy, some honk or yell to keep up the good work but only once have I ever gotten a person yelling that I was messing up their business and that their brother was the one who puts out the signs. I tried to explain that they are trash, putting them out is illegal and that I was doing nothing wrong but they called the cops on me anyways. If you put out sign just know that any of the ones I see I tear down so just dont even bother 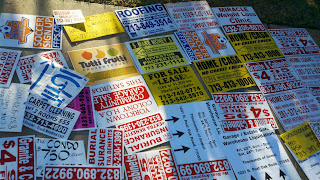 Apparently the city is cracking down but I have even seen a city truck driving around picking them up. I think its good and bad, i dont like that they are using tax dollars to pick them up but I also hate them so i dont know if im for the city trucks picking them up or not. I like the community volunteers approach like they
have done here or here Ive created my own group to coordinate my own modest attack on bandit signs 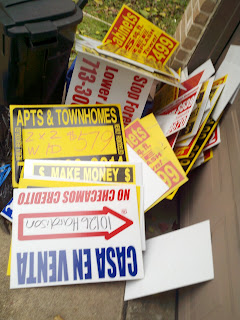 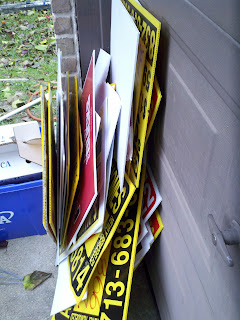