so looks like this was released on twitter blog a week ago but im just now seeing it. What do people think? are there users who you actually ended up following? It may help to show the last 5 tweets for a user in suggestions list so you can see the type of messages they create

So im not sure if its a beta or twitter has already rolled it out everywhere but it seems like they are now including suggestions in the sidebar. See my screenshots below 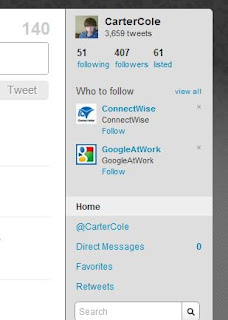 it looks alot like Facebook's suggestions but when you click it tells you a bit more and i was able to start to infer what is driving these recommendations. 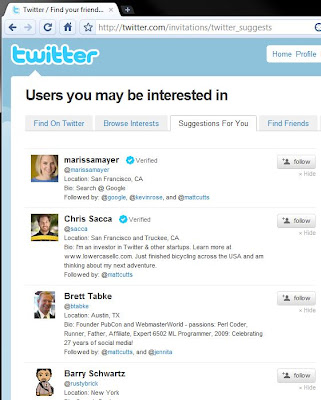 you can see it has the "followed by" and then names of people you are already following, I guess the ideas is that if multiple friends are following someone then you are likely to find that person interesting aswell... is anyone else seeing this test going on? talk to me in the comments or on @cartercole