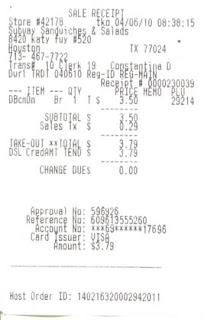 I was a Blimpie fan... i hated the way that Subway cut their sandwiches, i mean what the hell why would i want a trench dug out of my bread instead of just cutting it in half like the rest of the world. That changed and Subway got better for me... then they released the $5 footlong and their now famous "eat fresh", which btw is what my son screams whenever we pass one "daddy daddy eat fresh" but now after the King has stolen McDonald's egg sandwich for a dollar Subway with its thousands of locations thinks its loosing money by not offering breakfast and is trying its had at the morning meal.

i decided to try it (hey they did enough advertising ill give it a shot and see if they pass snuff...) i walked over to my office park subway and its empty, which is a change because at lunch that place has a line out the door from 11:50 to 1:20. apparently nobody else got the word so i take a look at my choices and decide on a flat bread double bacon and egg toasted thing (see picture below) its kinda cool because they try and make it like a build your own breakfast but theres really only a couple  things that go with an egg, bacon and cheese sandwich... so i also got the green peppers and onions. the english muffin version is like 2$ but its too small... it was decent but not that impressive, i may go back and try something else but theres not much of a choice (beef or ham something like that) but thats my useless post for the day :)